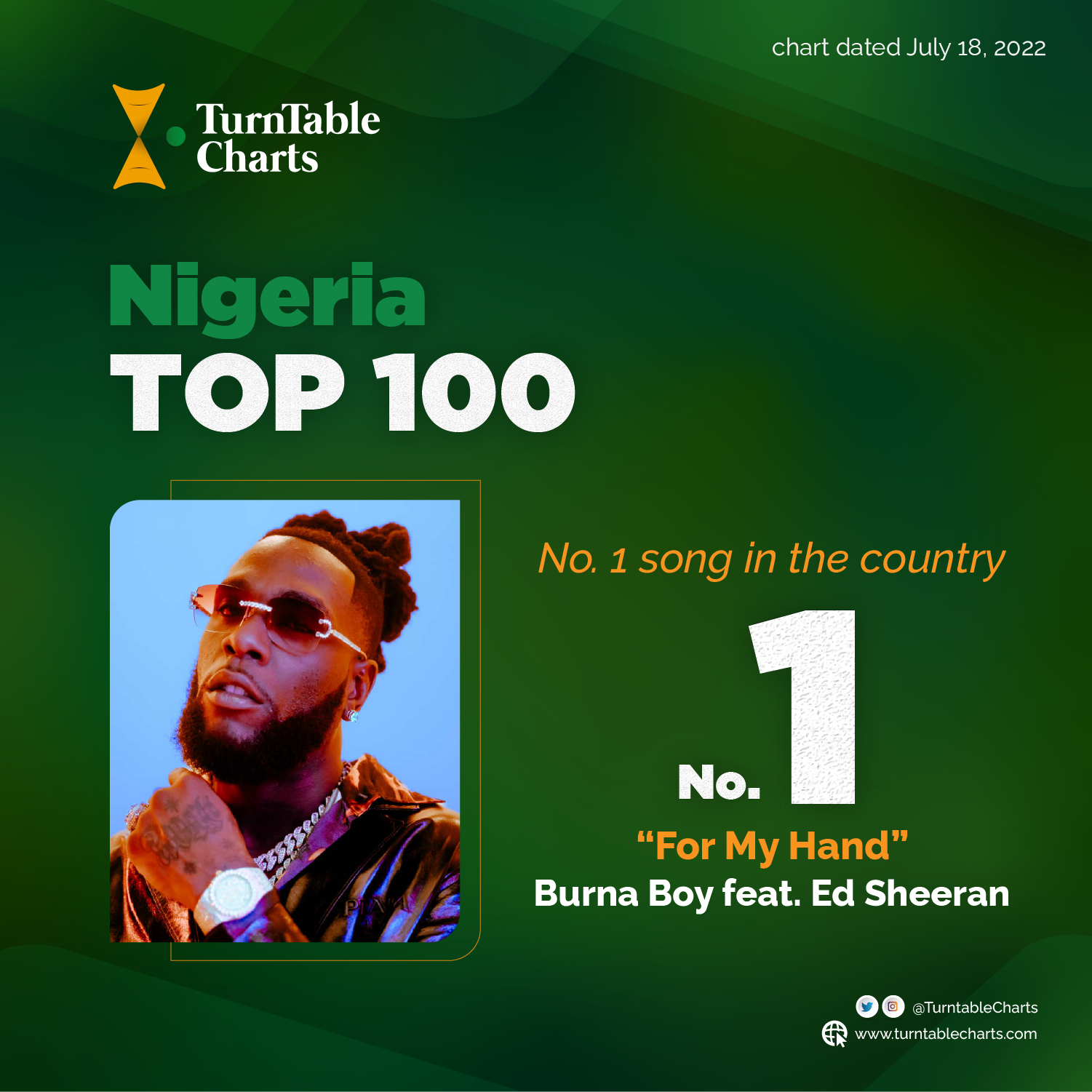 Burna Boy & Ed Sheeran Debut at No. 1 in Nigeria with “For My Hand”

Chart rankings on the Nigeria Top 100 are based on weighted formula incorporating audio and video streams within Nigeria, as well as airplay on radio and satellite TV in the country. It is the first and only standard music chart in Nigeria, providing comprehensive music activity including the official No. 1 song in Nigeria

Burna Boy's "For My Hand" with Ed Sheeran, blasts in at No. 1 on the Nigeria Top 100. The collaboration marks the first No. 1 entry for both artistes on the chart.

The track arrives as the second No. 1 entry on the Nigeria Top 100 – the chart was launched last week as the first standard music chart in the country that combines all platforms.

Before the Nigeria Top 100, TurnTable Charts published a Top 50 aggregate chart that combined freemium streaming only with radio and TV airplay. On the chart, Burna Boy had three No. 1 entries while Ed Sheeran had one.

Additionally, "For My Hand" is Burna Boy's fifth No. 1 entry on the Top Streaming Songs chart (second off Love, Damini) and Ed Sheeran's second on the streaming chart.

"For My Hand" also starts as the No. 1 song on the newly launched Top Afro-POP Songs chart.

Last week No. 1, "Peace Be Unto You" slides to No. 2 on this week's chart – it continues to overwhelmingly lead airplay in Nigeria with 79.1 million in airplay reach (up 27%). It leads the radio chart for a third week and reaches No. 1 on the TV chart for the first time.

Outside the top ten; All of Love, Damini's songs are in the Top 50 – "Jagele" at No. 45 is the lowest charting song off the album.

Crayon's "Ijo (Laba Laba)" rockets to No. 18, jumping seventy-two places in the process.

Chris Brown's "Nobody Has to Know" with Davido debuts at No. 57 while Fireboy DML's "Bandana" with Asake launches at No. 66 off one day of tracking.