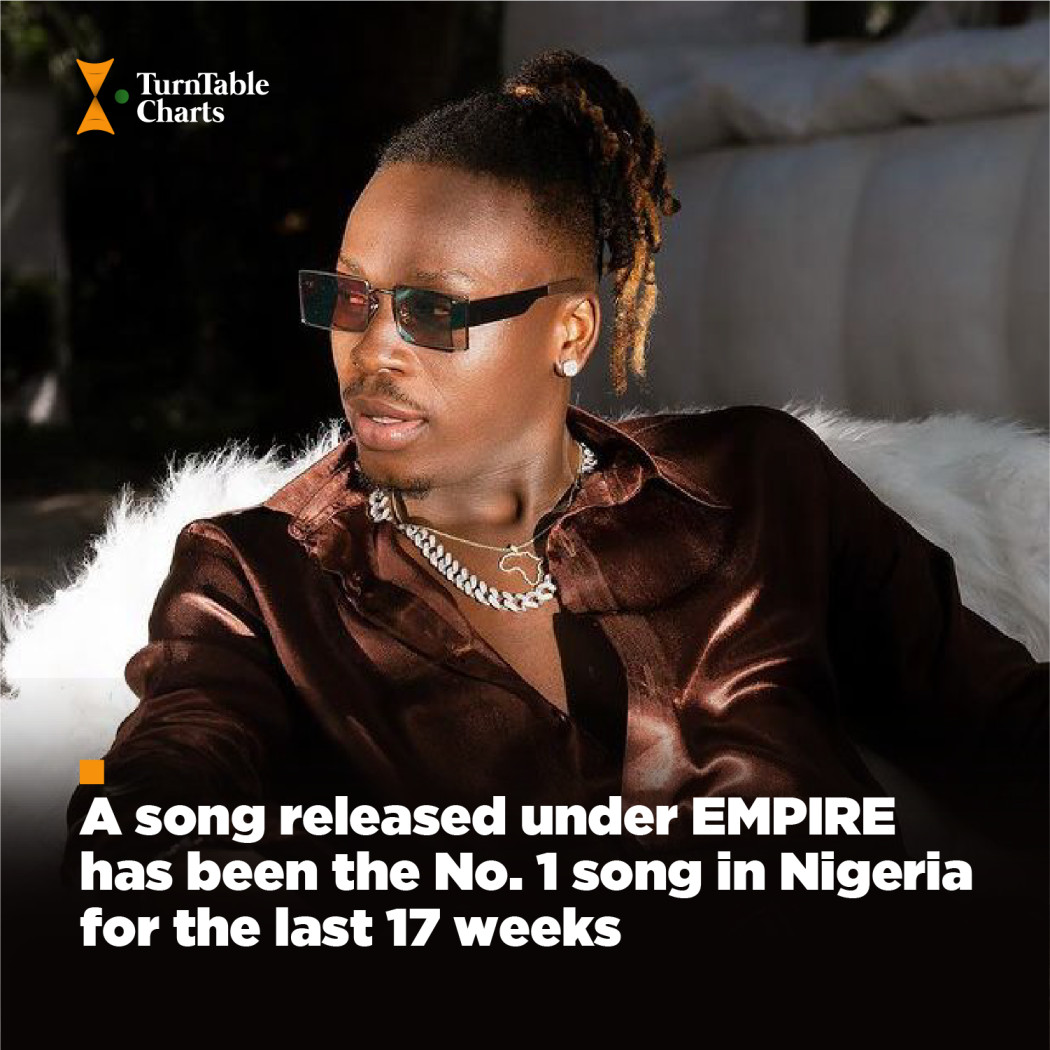 EMPIRE continues to cement its status as the leading distributor and label in Nigeria. Having finished as the No. 1 distributor in 2021, the label has continued even stronger into 2022 and this is evident by its monopoly of the No. 1 singles so far this year.

Ten songs have reached No. 1 in Nigeria so far in 2022; seven of those on the defunct TurnTable Top 50 and the remaining three on the new Nigeria Top 100. Out of these ten, eight have been released under EMPIRE. They are; Fireboy DML & Ed Sheeran’s “Peru,” Asake & Olamide’s “Omo Ope,” Asake’s “Sungba (Remix)” with Burna Boy, Black Sherif’s “Kwaku the Traveller,” Kizz Daniel & Tekno’s “Buga (Lo Lo Lo),” Asake’s “Peace Be Unto You,” Burna Boy’s “For My Hand” with Ed Sheeran and Fireboy DML’s “Bandana” with Asake. The last six have come in the past seventeen weeks. The non-EMPIRE No. 1s so far in 20220 have been Skiibii's "Baddest Boy" with Davido and Pheelz & BNXN's "Finesse."

This level of dominance is unprecedented, especially with multiple acts; the longest uninterrupted run by a label or distributor was KeyQaad’s 11 week run with Omah Lay’s “Godly” and emPawa Africa’s 11 week run with “Sip (Alcohol) and “Baby Riddim” – the former taking ten weeks of the total.

In an interview with TurnTable Charts earlier this year, Eze Ezegozie, Vice President, Market Development of EMPIRE Africa, mentioned that recent success “just makes us work harder because success is not in doing it once, but in replicating that same success for our entire family. We’ve set the bar high for ourselves and for the company. We need to get there again, this time with the no. 1, 2 and 3 albums and artists.”

Clearly, EMPIRE is on course for major accolades as we approach the business end of the year.