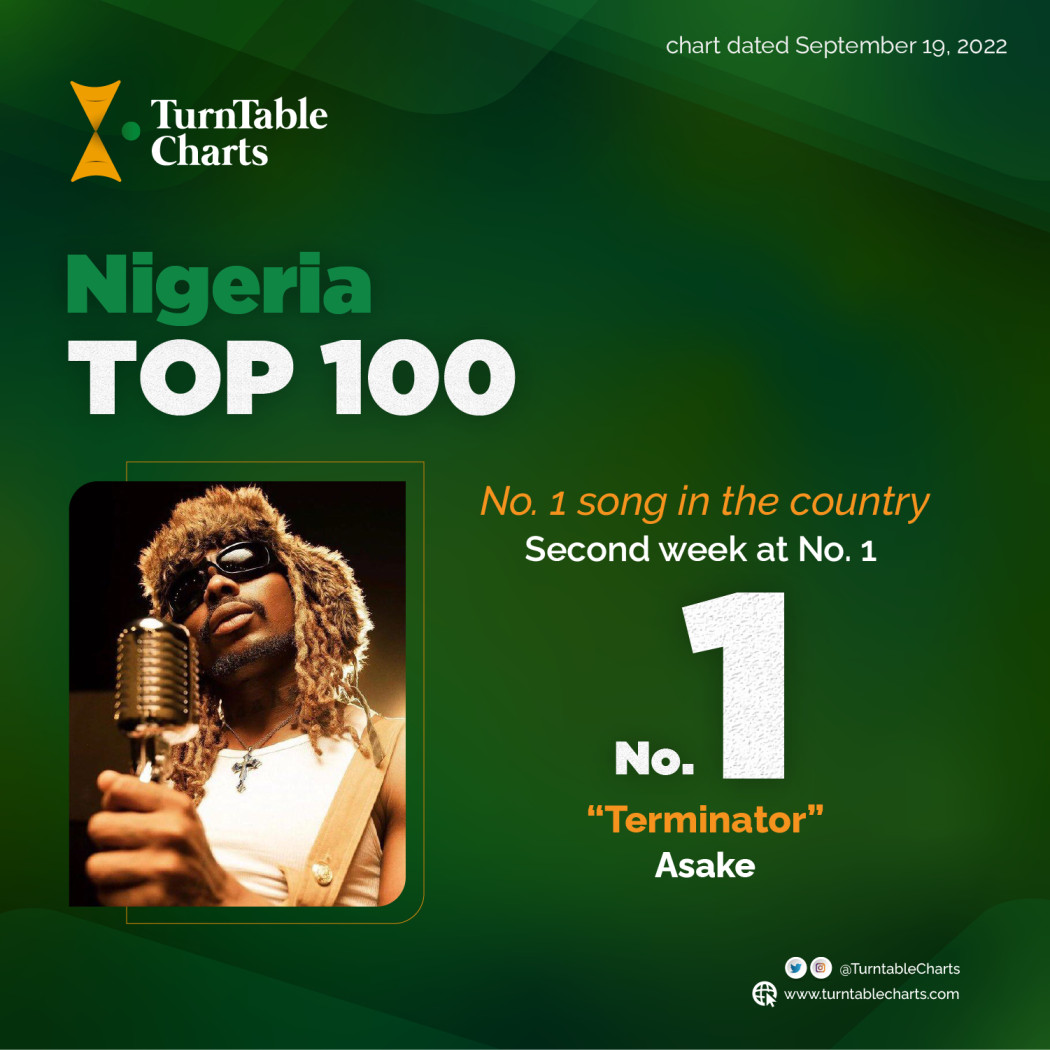 Chart rankings on the Nigeria Top 100 are based on weighted formula incorporating audio and video streams within Nigeria, as well as airplay on radio and satellite TV in the country. It is the first and only standard music chart in Nigeria, providing comprehensive music activity including the official No. 1 song in Nigeria

Asake boasts one of the dominant weeks in the 2 year-plus history of TurnTable Charts, becoming the first artiste to land eight entries in the top ten in a week on any of the aggregate charts in the country.

Asake is the first artiste to claim as many as eight entries in a single frame – surpassing the previous record held by Davido (7 on the chart dated November 23, 2020 of the defunct TurnTable Top 50).

Leading the way, Asake’s ‘Terminator’ which returns to No. 1 on the Top 100, logging its second week atop the chart. Ten of the tracks on the album already debuted on the Top 100 last week off one day of availability during the tracking week. All these tracks have moved into the top 25 in addition to  two new debuts in ‘Reason’ featuring Russ at No. 20 and ‘Sunmomi’ at No. 23.

Mr Money With The Vibe also joins Davido’s A Better Time as the only albums to generate as many as eight top 10 songs in Nigeria (‘Sungba (Remix)’ which is No. 17 on this week’s chart peaked at No. 1 for a week earlier in 2022).

Here is a look at Asake’s eight songs in the TurnTable Nigeria Top 100’s top 10 region as well as their Nigerian streams and airplay during the tracking week of Sept 9 – 15, 2022.

Rank, ‘Title’, Artiste Billing (if not on MMWTV album), [Streams and Airplay Audience]

The song’s streaming sum marks the second-best in a single week in 2022 (since the launch of the Nigeria Top 100 on July 9) trailing only the 6.83 million of ‘Terminator’ in its debut week. ‘Terminator’ tops both the streaming and TV charts this week.

In addition, Asake stat pads his number of top ten entries in Nigeria, rising to No. 3 on the all-time list behind two of the biggest acts in Nigeria

Artistes with the Most Top Ten Entries in Nigeria

On the genre charts, ‘Terminator’ is No. 1 on the Street-Pop chart; ‘Bandana’ spends a ninth week atop the Afro-Pop Songs chart; ‘Muse’ moves to No. 1 on the Afro-R&B chart while ‘Dupe’ tops the Alternative genre chart.

As for EMPIRE, the label & distributor has now logged a record 26 consecutive weeks with the No. 1 song in Nigeria. The streak started with ‘Sungba (Remix)’ moving to No. 1 on the chart dated March 28 and has included No. 1 hits by Black Sherif, another 4 by Asake, Kizz Daniel, Burna Boy and Fireboy DML

In between Asake’s domination of the top ten; ‘Electricity’ drops 3-4 on this week’s top ten while Burna Boy’s ‘For My Hand’ with Ed Sheeran falls 4-9.

Outside the top ten; Wizkid’s ‘Bad To Me’ debuts at No. 11 off two days of availability during the tracking week. The song tallied 2.52 million streams (No. 11 on streaming) and 14.4 million in radio reach (No. 33 on radio). The song is now challenging for No. 1 on next week’s Top 100 – with a small lead above ‘Organise’ and ‘Terminator.’