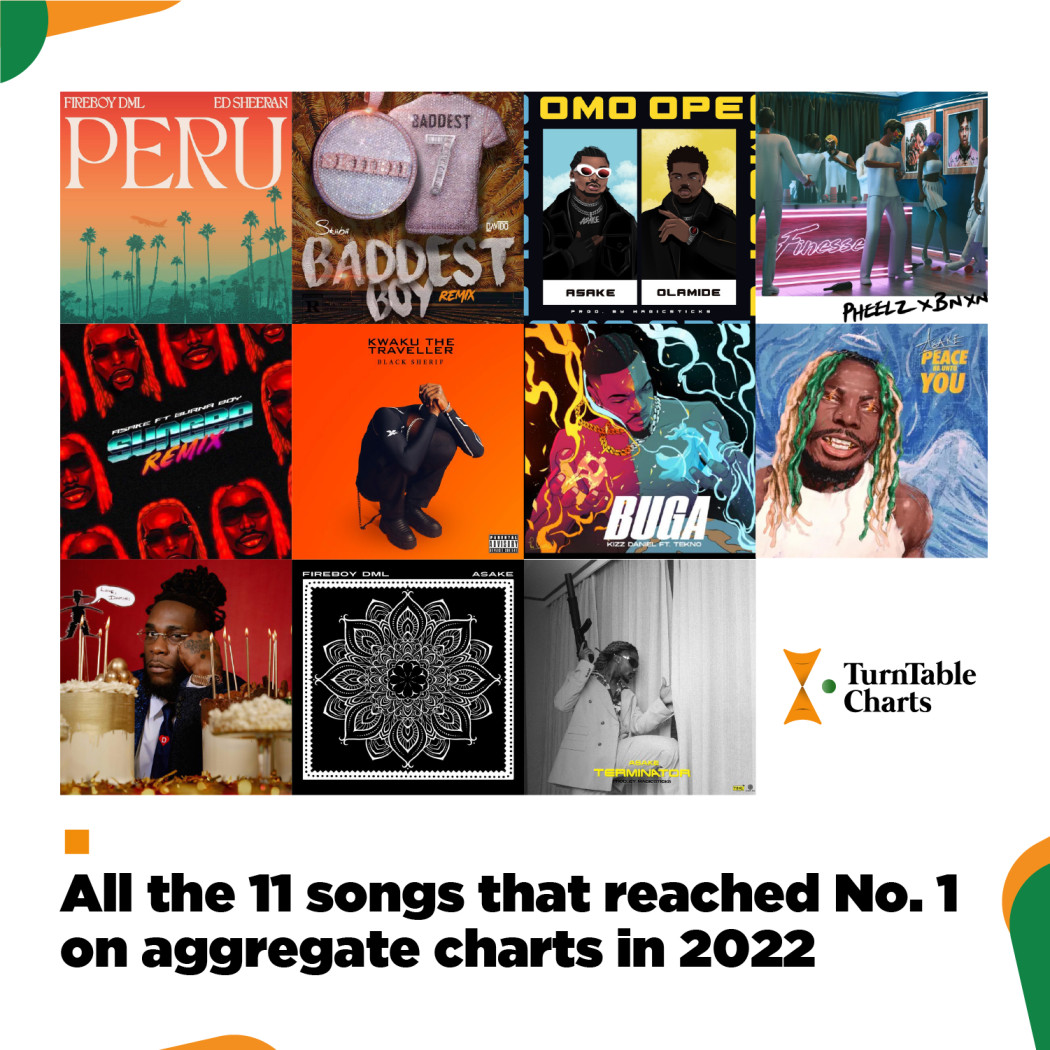 Asake, Crowd Vocals, Tik Tok, Amapiano, Snippets and the Common Trends in No. 1 Songs in 2022

There have been 11 No. 1 entries in the three quarters of 2022; the eleven chart toppers are spread across the Nigeria Top 100 (4) and the defunct TurnTable Top 50 (7). The former is the first standard music chart in Nigeria to combine data from all streaming platforms (Apple Music, Audiomack, Boomplay, Spotify and YouTube) and airplay across radio and TV stations in the country. The latter which ran for almost two years employed a similar methodology but without the addition of Apple Music & Spotify data.

In the eleven weeks of the Top 100, four songs have reached the summit of the chart; Asake’s “Peace Be Unto You,” which became the historic first No. 1 entry on the chart published on July 11, 2022 (for the week of July 1 – 7); it was followed by Burna Boy’s “For My Hand” with Ed Sheeran – which debuted atop the chart following the record-breaking debut of Love, Damini album. “Bandana” by Fireboy DML & Asake has spent seven weeks at No. 1 on the chart while “Terminator” by Asake – the current No. 1 – has logged two weeks atop the chart.

Here are the takeaways through the first three quarters of 2022;

One final thing that a lot of No. 1 songs have in common is being released under EMPIRE; nine of the No. 1 songs of 2022 have been released or distributed by the company – more than any of the trends reviewed. “Baddest Boy (Remix)” released under More Grace/Dvpper Music and “Finesse,” released under DC Talent Agency/Warner Music are the only non-EMPIRE songs to reach No. 1 in 2022. The company has released the No. 1 song in Nigeria for the last 26 weeks – a run stretching from March 26 when “Sungba (Remix)” topped the TurnTable Top 50.

Burna Boy's "For My Hand" with Ed Sheeran is the only outlier among all the No. 1 songs; it not an Amapiano song, it doesn't contain crowd vocals, no snippet of the song was released before its release as part of Love, Damini on July 8, it hasn't gone viral on Tik Tok and it is an original song.

It is important to note that the song was performed by the two artistes at the Wembley Stadium a week before release - but that doesn't qualify as a snippet in this review.